Funeral of Island Inventor Who Achieved So Many World Records

The Island is bidding a fond farewell today with the funeral of one its greatest inventors who died at the age of 83. 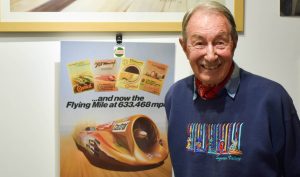 John Ackroyd, or ‘Ackers’ as he was known to friends, built the first electric city car in 1970. He then went on to design Thrust 2, a car that he built in a shed at Fishbourne. It went on to break the world land speed record.

Moving away from ground based challenges, John then became part of a team whose balloon went the highest a human had been (64k ft, ~12 miles)

In 2018 John was presented with the Freedom of Ryde. The motion for the award read: John started as a 16 year old apprentice in 1953 at Saunders Roe and went onto be an internationally recognised inventor, engineer and designer which provides an excellent model for encouragement of Ryde school children to think of a future in science and engineering.